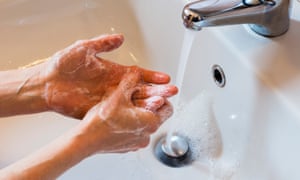 People need to spend 20 seconds washing their hands to fully get rid of germs, experts say.

The Royal Pharmaceutical Society (RPS) said washing your hands for 20 seconds – the time it takes to sing Happy Birthday twice – was the only sure way of getting rid of viruses and bacteria that can cause colds, flu, infections and upset stomachs.

It is calling for people to wash their hands more thoroughly as a way of cutting down the need for antibiotics, which are becoming less effective as bugs become increasingly resistant to them.

About a third of cases of diarrhoea and 16% of respiratory infections can be prevented through good handwashing.

The RPS’s poll of more than 2,000 people found that 84% were not washing their hands for long enough.

Meanwhile, 65% do not always wash their hands before eating, and half do not wash them after touching animals including pets.

The RPS’s president, Ash Soni, said: “We don’t wash our hands often enough for long enough to get rid of the bacteria that can cause illnesses.

“Even when we remain unaffected by the bugs we carry, if we don’t wash our hands we can transmit infections which then become a real problem for those who are more vulnerable, such as children and the elderly, who may then need to be prescribed antibiotics.

“Antibiotics should not be given for viral infections but often still are, partly due to patient demand.

“It’s easy to pick up an infection and once ill, people often visit their GP to request antibiotics because they think they are not getting better quickly enough, when in fact infections can be expected to last longer than you might think.”

It says people should look up the handwashing technique recommended by the NHS, which lasts for 20 seconds and includes the back of the hands.