Return of The Drive-in

Due to Covid 19, lots of things and old ways of the past could remerge. Nostalgic entertainment …like the Return of The Drive-In Theatre is definitely a blast from the past.

Let’s hope! Let’s experience lining up(of course in a car) to get a good parking spot, hoping it didn’t rain, hoping the speaker worked and last but not least seeing two movies for the price of one. What a fun summer-time experience it was! 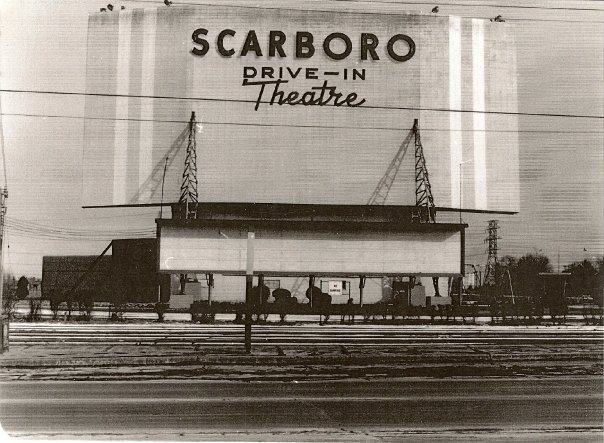 This drive-in theatre was located on the east side of Kennedy Road at Ranstone Gardens (south of Lawrence Avenue East).

Was advertised as having the biggest screen in Canada, a supervised kiddyland and ‘double car ramping’ to bring you closer to the screen. The opening attraction was “Summer Holiday”, starring Mickey Rooney and Gloria DeHaven.

Drive-ins were a fairly new concept at the time and were being marketed as the perfect form of family entertainment. Many of Scarborough’s residents through the 1950s, 60s and early 70s enjoyed an evening at the Scarboro Drive-In.

In 1963 the Drive-In began offering Sunday shows. However, by the late 1970s, the changing community and increased traffic on Kennedy Road made it difficult for the Scarboro Drive-In to continue operating successfully and the facilities were closed. The City of Scarborough later acquired the property and built Jack Goodlad Park and community centre.

Jack Goodlad Park still exists as of this post, July 2008.

The post Return of The Drive-in appeared first on Blog - DannaBananas.com.