It’s Father Clickmas: can Santa save Christmas over Zoom?

It’s Father Clickmas: can Santa save Christmas over Zoom?

It’s 130 years since Father Christmas first appeared in a department store. But this year is the strangest one yet – with virtual calls taking the place of shopping centre visits. Is it enough to keep the ho ho hos flowing? 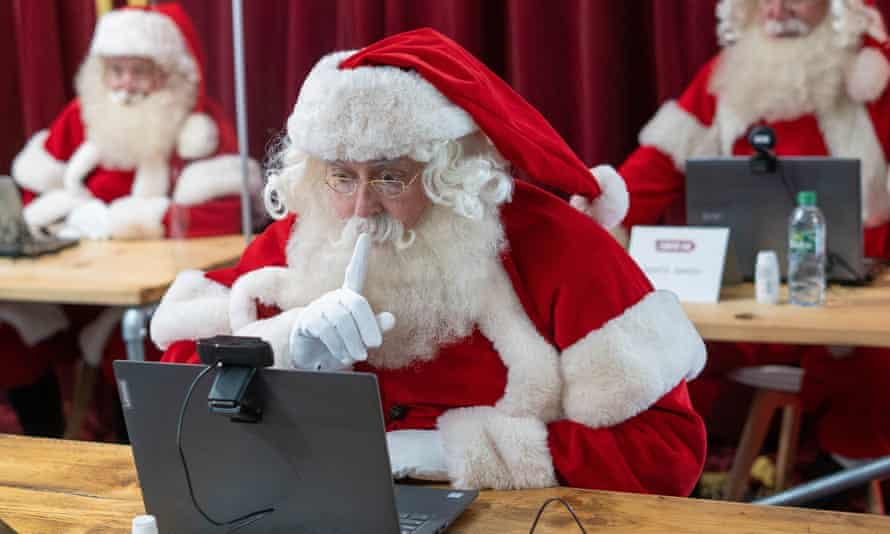 Five bearded men, dressed head to toe as Santa, wearing fur-trimmed face masks, file into an office building in London and sit behind wooden desks – laptops and webcams in front of them. The room has been made magical with the addition of a red and gold curtain, a snow-flecked Christmas tree and a stuffed penguin perched on top of some lockers. In years gone by these off-duty actors and former children’s TV presenters would have sat in department store grottos and worn out their knees taking the weight of Britain’s children. But they are here today to brush up their tech skills and learn how the in-store Santa can adapt and survive in the middle of a pandemic.

The seminar is led by James Lovell, a honey-voiced compere who straddles the line between practical teaching and keeping up the illusion of snow and elves. He leads the five Santas through exercises and practical advice on how to handle the intricacies of online video calls. The Santas pepper Lovell and a tech expert with questions about how they will see the children in their virtual grottos.

“It’s not a good year for Santa bookings,” says Lovell, who runs the workshops through his entertainment production company, Ministry of Fun. “However, we all need magic in our lives. This year we thought: ‘What can we do to make sure children still have the chance to meet Santa?’”

Ministry of Fun would ordinarily book “hundreds and hundreds” of Santa appearances across the country, but this year will be “considerably down”, says Matt Grist, the company’s managing director. “Maybe 10% is a generous estimate of what we may do compared with normal.”

In response, they spent months developing an online experience, Santa HQ, that allows children to complete 32 daily tasks (including pre-recorded challenges with Santa’s elves and drawing exercises) they can then talk about live with Father Christmas on a live video call. The tasks offer a useful crib sheet for the Santas and a handy conversation starters for any children who might feel overawed by the experience.

The initiative has roped in some unusual backers, including Jimmy Wales, better known as the founder of Wikipedia. During the summer, he saw how things were going with the pandemic and thought that children’s end-of-year experience with Santa was in jeopardy. In response, he partnered with Ministry of Fun. “It’s been a tough year, and we want children to have a nice Christmas,” he says. “And this is a little thing I thought could help out.”

Father Christmas himself is, of course, immortal and as old as the first child who believed. But the in-store facsimile was due to celebrate a big anniversary in 2020. One hundred and thirty years ago, James Edgar, a Scot born in Edinburgh in 1843, decided he wanted a bit more panache in his shop. He had emigrated to the US and settled in Brockton, Massachusetts, where he set up a department store that became a cornerstone of the community.

Edgar himself became highly regarded by his adopted home town, dressing up as various characters to celebrate major events in the calendar. For the Fourth of July, he would dress up as Uncle Sam, or a revolutionary-era soldier. One year he wore his kilt and sporran; another, a clown costume. At Christmas in 1890, he decided to start dressing as Santa Claus, taking inspiration from the classic drawing of the character by the German-born American artist Thomas Nast, who cemented the iconic image of Santa Claus in the collective consciousness.

John Merian, president of Merian Brothers, a tuxedo and suit shop, is Brockton’s unofficial historian of Santa Claus, and has been for the past 29 years. “It’s a little disappointing,” he admits. “We’re putting everything on hold. We’re locked down, and going to be even more locked down this year now the virus is spiking in Massachusetts.”

The Saturday after Thanksgiving would ordinarily be Brockton’s big launch party for Christmas: the town would recreate the moment Edgar became the first department store Santa. The 130th anniversary gave Merian even more reason to celebrate; planning began in December last year, and was under way when Covid-19 was declared a pandemic by the World Health Organization. “I was very, very upset at the beginning, but I think I came to grips with the reality that this is something the world is dealing with, not just Brockton,” he says. The people of Brockton won’t be doing online Santa meetings – although others will.

“The decision on whether your local shopping centre or garden centre will have a grotto is taken typically between February and July,” says Matthew Wise, of Great Grottos, which has been supplying grottos in the UK for more than a decade. Back then we were in the first throes of Covid and case numbers were spiking, and many decided not to risk the high-touch, close-interaction environment of a grotto.

Wise’s firm will run about 30 grottos this Christmas – half what it would normally do – and make up some of the shortfall with video chats. Like Ministry of Fun, Great Grottos has its own virtual Santa call experience, called Live Santa Video Calls. Wise reckons that 500,000 visits to physical grottos in the UK have been cancelled.

That has an impact on shopping centres, which have been using the promise of meeting Santa in his grotto to lure in physical customers who might otherwise shop online.

One Santa asked for anonymity, but explained how he fell into the role. An actor who has played scenes opposite Elizabeth Hurley on TV, he has been a Santa for Selfridges since 1991, after spotting an advert in Time Out and being interviewed for the job by the store’s HR department, in which, as part of that, he had to read from a section of The Night Before Christmas. The first year was a shock. “The waiting time was two hours, and you had less than a minute with each child,” he says. “It was a conveyor belt.” On the Saturday before Christmas in 1991, he claims, Selfridges’ two grottos saw visits from 14,000 children. Still, he wasn’t put off: he at one point held Guinness World Records for the deepest ho ho ho and the fastest time to eat three mince pies. “It’s the best job in the world,” he says.

His own experience of being pushed, frightened, into meeting Santa at the age of five stood him in good stead to empathise with nervous visitors. “You’re trying to make that magical connection with a child who hasn’t seen Santa before,” he says. It’s a tough gig for a classically trained actor, even though playing parts in children’s musicials has given him plenty of experience with handling young crowds.

Another Santa who was willing to provide a fuller peek behind the beard is Simon Davies, a 61-year-old former children’s presenter from Godalming, in Surrey. Davies parlayed his children’s TV fame – he presented the CBBC programmes Play School, Playdays and Tikkabilla – into stints in panto, but wanted a change of pace over Christmas when he became a father. “You’re away for seven weeks over Christmas,” he says. “I was looking around for a Christmas job I could do a little closer to home.”

Davies became a Santa for Harrods through the Ministry of Fun. “If you time it right and work for them, you can be doing four or five days during the week from around the eighth or ninth of November, and you then have six or seven weeks solid,” he says. He would then cap that off with weekend work elsewhere. “For a lot of us, that’s a good end to the year.” For the remaining 10 months of the year, Davies plays different roles – Winston Churchill, Captain Evans of the Titanic, or Henry VIII – for a company called Virtual School Visits. Children log on and have half an hour to pepper Davies about why he ran into the iceberg as he sits in front of a green screen.

That experience with video calls means Davies is more bullish than most about taking on hordes of online children with their Christmas lists. He is partway through furnishing his top room to look like a grotto, using props provided by the Ministry of Fun, which decided that the risk of green screens malfunctioning at the most magical moment of the year was too great. Davies and his wife, who runs youth theatre meetings over Zoom, are paying for superfast fibre wifi to lower the risk of missing the all-important request from the child for their Christmas presents through a dodgy connection. “It’s 67.4 megabits a second,” he tells me, proudly.

Whether we will lose the magic over faltering wifi is up for debate. “You’re never going to make it the same, but this is as good as it gets this year,” says Wise. Digital meetings will give his army of virtual Santas longer with children, he points out. “Normally, you’re under time pressure: after five minutes, there are other people waiting,” he says.

Wise has been handling bookings for physical grottos for years, and from sifting through the data collected from his customers, he knows that some are likely to prefer the virtual experience. The information he asks includes a special requirements section, which some families fill in. Of those who do, 55% are asking on behalf of autistic children whether it is possible to reduce queueing time, or for information about what the grotto will look like ahead of time so they can prepare their child for the sensory overload. “It’s reassuring for those customers to know it’s going to take place in their own home at a time of their choosing,” he says.

That’s something that Jimmy Wales understands. “I think in some ways this could be better than physical meetings,” he says. “No parent really enjoys standing in the queue. Some of the children are crying. This has the opportunity to be a better experience in the sense that it’s personalised. If people do this and think: ‘That’s pretty awesome, I didn’t have to go down to the shopping mall and stand in a queue,’ and it’s magical, then that could be good.”

The post It’s Father Clickmas: can Santa save Christmas over Zoom? appeared first on Blog - DannaBananas.com.