Are You Ready for The Rebirth of Cassette Tape?

Are You Ready for The Rebirth of Cassette Tape? 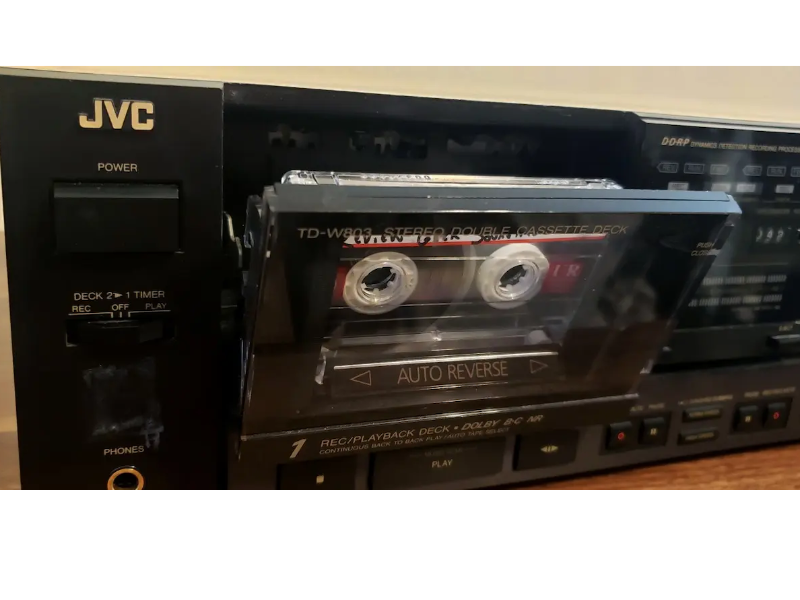 I was recently plugging around in a closet when I spotted it lurking in the semi darkness. I found myself staring at and wondering why, for about forty years, I held onto my JVC cassette deck. My trusty deck and I had some fun back in the day. Tapes, now so long ago, were not terribly expensive. If one was really adventurous, those (probably illegally made) gas station tapes could be had for about a dollar. And then, it seems now, poof, cassettes were gone.

Anyone who does not think we had format wars in the 60’s and 70’s should revisit history. LP’s lead the way. They were the 800 lb. gorilla. The ringleader. Radio occupied a lot of listening time although I personally never considered it the ideal way to play a song.

8 Track tapes were somewhat popular, although never revered for sonic excellence. I don’t know of anyone who did not detest an 8 track changing tracks in the middle of a song. Probably second to the LP was the cassette tape. In fact, cassettes probably put the death nell on 8 tracks and forced reel-to-reel into near oblivion as a consumer product.

Introduced in 1963 by Belgium manufacturing giant Phillips, cassettes were initially intended for dictation machines. As tape fidelity improved, recorded music quickly followed. Cassettes offered something LP’s have never been able to easily accomplish – allow users to make their own recordings.

Raise your hands, how many audiophiles had a cassette deck and recorded their own music? I sure did. I made tapes for my car. A one-time next-door neighbor was an aerobics instructor and I made tapes for her workout sessions. I also recorded songs from the radio. It always drove me nuts when the DJ talked right up to the time when the singer actually started singing. SHUTUP! I used to pointlessly yell at the radio. Combine these features with a well recorded, studio authorized tape and cassettes were a force to be reckoned with.

But alas, they couldn’t survive.

In 1982, something called the “compact disc” came along and quite nearly, quite quickly, killed cassettes in whole. Didn’t do LP’s any favors either. Oh sure, handheld recorders using mini cassettes were still popular. Yet there was a gradual decline of tape use and by about 1990 they had all but disappeared. Soon thereafter, consumer oriented production essentially ceased.

While not specifically a declarative statement, reel-to-reel, the “other” tape format, is widely considered the zenith of recorded music for home-based audio. In the 1960’s, R2R was typically found on the finest and most expensive systems. Today, we euphemistically call them a “1%” system – only one percent actually qualify. R2R also basically evaporated from the audio landscape, a fact made simple as it was never a widely used format to begin with.

Cassette tapes were not without their drawbacks. Like any recorded medium, it was a challenge trying to fit songs on only so many minutes of tape. Then there was the issue of a song ending halfway through at the end of side one and continuing on side two. And if you were ever so unfortunate to have your tape get caught between the play head and capstan, well, game over for that cassette. I’ve had to rip more than one cassette out of a player because the tape somehow managed to get caught. And although probably not a serious issue, plastic cassette housings were breakable. I’ve had them crack just by accidentally dropping one on the floor.

Ease and portability. Two words that absolutely mean something very important in recorded music. Cassettes allowed portable, handheld playback devices to become hugely popular. They also allowed users to create their own music, or offered customization, something an LP could not do. Liken that to what streaming is currently doing to CD’s. It would seem the cycle continues.

Sonic quality? What about it? When cassettes were highly popular, manufacturers like TDK, Sony and JVC reminded consumers their music was recorded on tape (this was before digital) and the sound quality was as good as an LP. Remember the Memorex commercial? Were they correct? I’m quite dubious about that but we’re talking about marketing here. Manufacturers claims were then as now always in favor of their own product, never against.

When the digital age began, cassettes started to evaporate and as earlier stated, “poof,” they were gone. CD’s, just like cassettes before, made playing music simple. My JVC cassette player was unceremoniously relegated to the closet, its place of residence for the last forty years. Has the time come to perhaps dig it back out, find some RCA cables and see if it will work with a modern audio system? Because maybe you didn’t notice, but cassettes have again begun to show up in the marketplace.

I first began to notice them on Amazon. Where they list the available formats – streaming, CD, or LP, every so often I will see a fourth choice – cassette. Hmm, I would think, that’s interesting. While the cassette revolution, from an audiophile perspective anyway, is not on par with the LP revolution, juggernaut that it is, there does seem to be a revival of sorts.

Cassettes have several things going for them. One, immense popularity back in the day. That popularity seems to be carrying over into today because of a modern idiom; “the coolness factor.” There are several names but let’s use one we all have heard before – “hipsters.” It would seem tapes have a certain “coolness factor.” From an audiophile perspective this is of little value. We are interested in sonic quality. But to consumers overall, maybe so.

Another fact of paramount importance is cost. Cassettes are mostly less expensive to make and sell than CD’s – generally speaking anyway. New LP’s cost about $25.00, a new CD about $15.00 and a cassette? They can be had for about $10.00 making them highly marketable.

Lastly is a possible explanation that mystifies me – nostalgia. Okay, I’ll go along with the notion there are those who enjoy returning to times past. But let’s be honest here, “back then,” cassettes were never a sonic tour de force in recorded music. My guess is they won’t be today either. But then again, I’m not especially impressed by streaming.

Are we reverting back in time, playing that all too real game of completing the cycle? What was once is now? Or is the cassette a current day, legitimate, growth-oriented format option? Time will tell. Maybe I better start pricing a modern cassette deck – just in case my forty-year-old friend isn’t up to the task.

The post Are You Ready for The Rebirth of Cassette Tape? appeared first on Blog - DannaBananas.com.