The Fingerling Monkey may be this year’s hottest toy, but its popularity is far from unparalleled. A new must-have toy seems to arrive every holiday season. Richard Gottlieb, the chief executive of Global Toy Experts and publisher of Global Toy News, discussed some of the Hot Toys like the Fingerling’s craze-making predecessors over the last generation.

Popular toys are often like comets across the sky, drawing attention quickly and fading just as fast. “A good fad is about eight months from explosion to collapse,” Mr. Gottlieb said. While few toys outlast the initial hype, the ones he listed have endured as cherished memories from childhood and helped shape play time expectations long after they left the shelves.

They were also big business. Mr. Gottlieb ranked the toys below based on the impact each had on the industry, indicating when they became major hits in the United States. “These products,’’ Mr. Gottlieb said, “became cultural touchstones.” 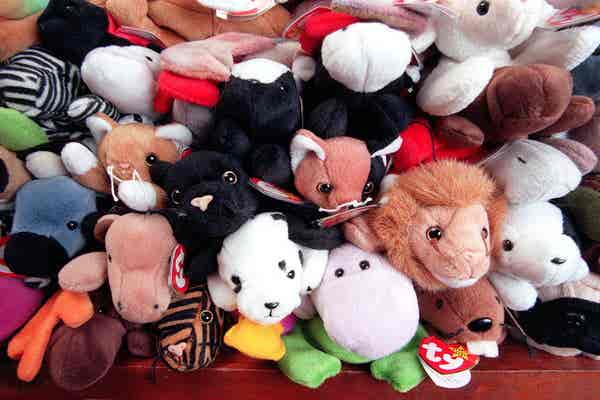 These pellet-stuffed animals, Mr. Gottlieb said, had an outsize cultural and financial impact. “It became an investment portfolio if you will,” he said.

He described how the company voluntarily limited supplies of these Hot Toys, leading to long lines of customers whenever a store got a fresh shipment. But the bubble quickly burst.

“Lots of people invested a lot of money and time,’’ he said, “but it wound up being worth virtually nothing, what a used plush animal would be worth.”

“It wasn’t a pretty doll, they were strange looking.” Mr. Gottlieb said, “Maybe there’s some appeal to the imperfect for us, because it’s who we are.”

Although these Hot Toys may have appealed to people’s humanity, they did not always bring out the best in shoppers.

“There were fistfights in the stores,’’ he said. “Big, big fights. People were nuts.”

“Super Soaker I think was revolutionary in outdoor play. It took the water gun to a whole new level.”

The thrill was in the power, Mr. Gottlieb said. “I just remember people were blasting the hell out of somebody with a heavy stream of water.” And now, he said, that enthusiasm is much the same for these hot toys. “People still get excited about the latest, most powerful water gun.”

Mr. Gottlieb said he still sees people riding these metal scooters to work today. Although they have had some staying power, they also represent the dangers of a product getting too popular, too quickly.

Early customers wanted more than retailers could stock, but that trend reversed after the first holiday rush. “You would go into stores and just see pallets and pallets of these hot toys, and it was over.”

“It was a really cool form of play,” Mr. Gottlieb said. Transformers could be manipulated in ways that other hot toys could not. “It’s double the pleasure.”

Since their release, Hasbro has kept the brand alive by expanding the Transformers universe. “It really created an entire category,” he said.

These dolls, Mr. Gottlieb said, signaled an awareness that dolls that are blonde and white are “not reflective of the culture that we have anymore.”

Some parents criticized Bratz for wearing clothes they viewed as sexualized, but Mr. Gottlieb said sex appeal was not the reason the dolls had staying power. Rather, these hot toys became so popular because America was becoming more diverse, and children wanted to play with a doll that looked more like they did.

“Bratz is the only doll that really ever challenged Barbie.”

“It started in what I like to call the schoolyard social network” in the United States. Several years after its start in video games in Japan, the Pokémon craze in America centered around groups of children who collected and traded the cards, and local merchants who catered to them, Mr. Gottlieb said.

“I can just remember going to retail stores and they’d have signs in the window saying, ‘we have Pokémon cards,’‘‘ he said. “It was that popular.”

The brand is having a renaissance now, thanks to the Pokémon Go augmented reality app. “I don’t think in some ways, we want to give up these things we loved in childhood, but we’re told as adults that we’re not supposed to be so enthusiastic. The augmented reality gave permission to re-embrace.”

Elmo was already a television celebrity when Rosie O’Donnell brought these hot toys onto the set of her talk show. “People just went nuts,” Mr. Gottlieb said. “They loved the way it had that chuckle.”

At the height of its popularity it also drew crowds at retailers. “I’m sure somebody got punched in the nose over Elmo, but I really don’t remember.”

“Teddy Ruxpin was kind of the first animatronic plush animal,” Mr. Gottlieb said. Although it was somewhat unreliable at first — about half of the early versions failed and were returned by customers — it broke the mold for how hot toys and technology could mix.

“Technology, part of that was always seen as hard, but teddy bears were soft,’’ Mr. Gottlieb said. “The combination of those things was fairly radical, as well as the notion that technology could be cute and emotionally engaging.”

This fantasy-style card game had intricate rules and a huge number of possible paths to the final win-or-lose outcome, and helped bring a small gaming subculture into the mainstream. “It’s a little bit of an outrider, but I included it because it was a real popularizer of the concept of the Dungeons and Dragons gameplay to a wider audience,” Mr. Gottlieb said.

Mr. Gottlieb said that the game genre grew in popularity thanks partly to “Magic.” The play format continues to attract people today.

Original Source of this post is the New York Times.